The Ryan Tubridy Show has joined forces once again this year with Fáilte Ireland, as part of its ‘Embrace the Wild Atlantic Way of Life’ summer marketing campaign. Ryan will be broadcasting live with RTE Radio 1 in Ballybunion and Portmagee in Co Kerry, as his show tours the Wild Atlantic Way from Monday 29th May until Friday 2nd of June. The tour will be known as ‘Tubs on the Wild Atlantic Way’ and will broadcast from a number of tourism businesses in locations along the route. 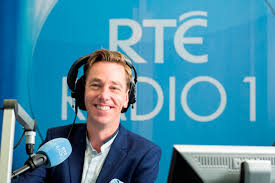 Fáilte Ireland is encouraging everyone to come out and attend the broadcasts. Looking forward to the arrival of the popular RTE Radio 1 show, Fiona Monaghan, Head of Wild Atlantic Way, Fáilte Ireland, said –

“Spectators coming down to watch the broadcast – whether in Ballybunion, Portmagee, Baltimore, Arranmore or Achill Island – can expect to see plenty of festivities, interviews, live music as well as hear about local tourism highlights. We are encouraging everyone to come on down and join in the fun and discover ways to ‘Embrace the Wild Atlantic Way of Life through the airwaves.”

This year, the tour will focus on a selection of our islands and seaside towns, kicking off in the beautiful Island of Arranmore Island (Árainn Mhór) in Co. Donegal, continuing to Achill Island to see the stunning Keem Strand, which features in the new Wild Atlantic Way TV advert currently on our screens.

This year also sees ‘Tubs on the Wild Atlantic Way’ travel further south to the vibrant seaside towns of Ballybunnion in Co. Kerry, Baltimore in West Cork, before finally finishing in The Moorings in Portmagee, Co. Kerry which is the starting point for many trips to the spectacular, otherworldly island of Skellig Michael. The Moorings is widely known for its connection with Star Wars, where many of the Star Wars cast hung out during filming on Skellig Michael and which houses a range of Star Wars memorabilia.
The RTE Radio 1 team have a busy schedule as the popular host broadcasts live from the following locations:
Monday, 29th May – Arranmore Island– Arranmore Holiday Village

Ryan will be interviewing some local tourism businesses from the surrounding area and discussing some of the many activities and experiences available to anyone touring the Wild Atlantic Way as well as trying some himself including deep sea angling and night kayaking.